Sorry if you're arachnophobic! 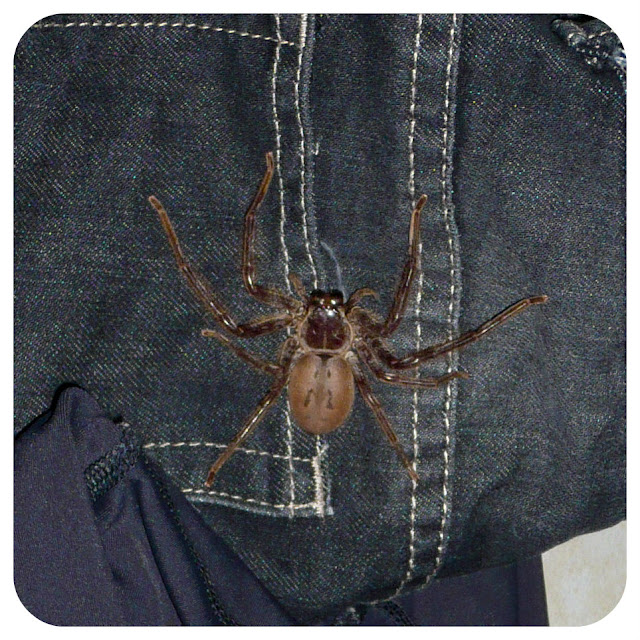 Hello friends!
Eeeeeek!
I must apologise now if you came across this post accidentally and you are arachnophobic!
This giant spider is a Hunstman. If you live in Australia you're probably pretty familiar with them already. They have a habit of coming inside when there is going to be a storm or lots of rain. Even though I'm not actually arachnophobic I always get a bit of a fright when I unexpectedly come across one of these :-)
This one was a particularly LARGE one, probably the largest one I have ever seen actually and I was HOLDING IT and I didn't even know!! Yeah, I squealed a little bit when I saw it.
I was getting ready to go on a camping trip with my nephew, I brought in some washing from the clothesline in the morning and when I went to fold the clothes this bad boy crawled out of the pocket!!! Arrrgh!
The leg span was approximately 14-15cm (I couldn't bring myself to get close enough to get an accurate measurement :-) And it's body was almost the size of a mouse!
Although they are venomous, thankfully it's unusual for them to bite humans, and their venom doesn't seem to be deadly to healthy humans :-) My dad has been bitten by one, in fact it bit him several times. he didn't get sick, he said it was just a bit painful.
Don't worry, we didn't squash this one. We got in on the broom and took it outside... then it ran back inside!! I helped by squealing, hehe. But eventually it went outside and stayed outside :-)
For most of this year we have been having a ridiculous heat wave and NO rain... so I hadn't seen to many of these in the house, but a few days ago the heatwave broke and so did the dry spell, we got lots of drenching rain and some pretty spectacular storms, which meant we had quite a few of these guys visiting us too. We've had one in particular that has been in the house for a bout a week... each day it seems to be in a different room... just hanging around... but when I got up today I couldn't find it anywhere... It's hiding...

xo Shara
As long as they're not touching me, they're actually quite beautiful, don't you think?
Posted by Shara at 9:00 AM