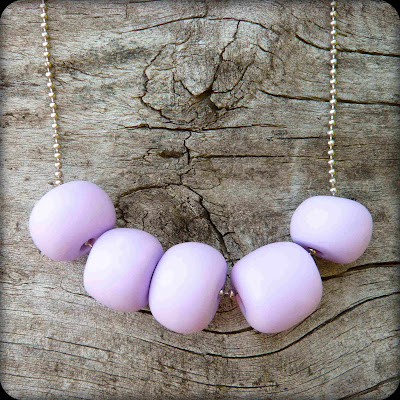 Hello friends!
Today I have been experimenting with polymer clay. I haven't played around with polymer clay for quite some time and I had forgotten how much fun it could be. I made some beads of varying shapes and sizes, none of them quite match the others, but I like the "organic" feel of them :-)
I used a 4.5mm double pointed knitting needle to make the hole in each bead, and also to suspend them over a muffin tray while baking them, so that they didn't get any flat, shiny patches (which will happen if you bake them sitting directly on a tray :-) I'm not entirely sure what I'm going to do with them yet, so for now I have just threaded them on a length of silver tone ball chain :-) I've also been doing a few experiments with adding texture to the beads (but they'll have to wait for the next round of photo's :-) 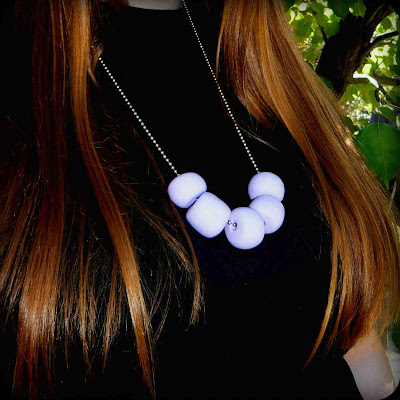 While I was in the back yard photographing the beads so I could show them to you I could hear a rustling noise by the back fence... I went to investigate and discovered that it was a little native rat gathering some old corn husks, discarded from the veggie patch, to make a nest?? I watched it for quite a while, it was very cute. It had a little friend too, so I'm hoping we might be lucky enough to have a whole brood of little native rats soon :-)
I know that photograph isn't very good, but I was trying not to scare them, so I couldn't get very close :-) 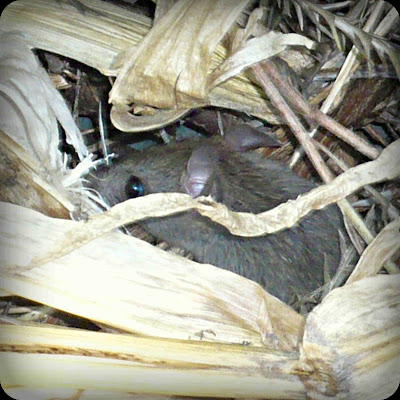 P.S. By native rat, I mean native to Australia. They're much cuter and sweeter than a regular rat. They're smaller, have rounded ears & a tail that is as short or shorter than its body length :-)
Posted by Shara at 5:37 PM